Danesfort GAA Club was founded in 1922.  It incorporates a broad area south of Kilkenny City, encompassing Danesfort itself, as well as Burnchurch, Cuffesgrange and part of Kells.   The Club borders rival clubs Bennettsbridge to the east, Graigue-Ballycallan to the west, Carrickshock and Dunnamaggin to the south and city club James Stephen to the north. 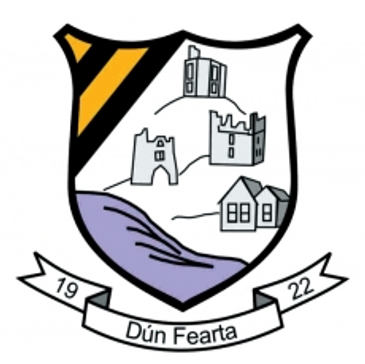 The Danesfort Crest is a beautiful reflection of our consideration of distinctive elements within our community.

Top centre : The Turret is the landmark building which sits atop of a ring fort, easily seen at the motorway interchange.  The ring fort dating back thousands of years before the coming of Christianity was used as a vantage point on which the Turret was built.  As part of the Wemyss Estate, the Turret was initially used for shooting deer and later as a more civilized tea house for the Gentry.

Centre of crest : Burnchurch Towerhouse on the right and Burnchurch Gatehouse to the left, built in circa 1200 AD.

Lower right : is the Schoolhouse in Cuffesgrange.  Built in 1813, it is the oldest functioning schoolhouse in the country.

Bottom left of crest :  The River Nore ebbs through the townland.
Finally, the year 1922 shows the year our club, Dún Fearta was established.